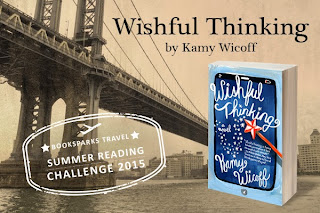 Synopsis
Jennifer Sharpe is a divorced mother of two with a problem just about any working parent can relate to: her boss expects her to work as though she doesn t have children, and her children want her to care for them as though she doesn t have a boss. But when, through a fateful coincidence, a brilliant physicist comes into possession of Jennifer s phone and decides to play fairy godmother, installing a miraculous time-travel app called Wishful Thinking, Jennifer suddenly finds herself in possession of what seems like the answer to the impossible dream of having it all: an app that lets her be in more than one place at the same time. With the app, Jennifer goes quickly from zero to hero in every part of her life: she is super-worker, the last to leave her office every night; she is super-mom, the first to arrive at pickup every afternoon; and she even becomes super-girlfriend, dating a musician who thinks she has unlimited childcare and a flexible job. But Jennifer soon finds herself facing questions that adding more hours to her day can t answer. Why does she feel busier and more harried than ever? Is she aging faster than everyone around her? How can she be a good worker, mother, and partner when she can t be honest with anybody in her life? And most important, when choosing to be with your children, at work, or with your partner doesn t involve sacrifice, do those choices lose their meaning? Wishful Thinking is a modern-day fairy tale in which one woman learns to overcome the challenges and appreciate the joys of living life in real time."

My Thoughts
Wishful Thinking is a very different book than what I usually read but I actually liked it. It was just want I needed right now. It was different, funny and a breath of fresh air. Who hasn’t felt that they are being pulled in a thousand different directions and wished they could be at two places at once? Well Jennifer feels just like that and when she discovers that a time traveling app on her phone will make it possible. She becomes the person she always wanted to be she is suddenly super mom, girlfriend and the woman who has everything under control. While she feels that at the time she has everything going for her at some point something will have to give. Does she really want a life like this or eventually does she want to focus on one thing at a time and fully enjoy life as it is meant to be?
Sometimes we think we want it all but at some point we will realize that what we dreamed of isn’t what we really want. Life isn’t all about the big flashy things sometimes it’s the little everyday things that we will cherish the most in life. This book is a pure gem! So do yourself a favor and take a chance on a book that’s funny and quirky, it’s the perfect book to take to the beach or cuddled up in bed with and I promise you will be glad you did.

Kamy Wicoff is the co founder of SheWrites.com, the world’s largest online community for women who write, and co founder, with publisher Brooke Warner, of She Writes Press. SheWrites.com and SheWrites Press were acquired in 2014 and are now part of the SparkPoint Studio family. Wicoff’s first book, the best-selling I Do but I Don’t: Why the Way We Marry Matters, was published by Da Capo Press in 2006. Her work has appeared in Salon.com, and has been anthologized in Why I’m Still Married: Women Write Their Hearts Out on Love, Loss, Sex, and Who Does The Dishes (Hudson Street Press, 2006), and About Face: Women Write About What They See When They Look in the Mirror (Seal Press, 2008). She serves on the board of Girls Write Now, a mentoring organization in New York City, and also formerly served on the Advisory Council for Stanford University’s Clayman Institute for Gender Research. Wicoff lives in Brooklyn with her sons, Max and Jed.
Connect with Kamy:
Website / FB / Twitter
#SRC2015 4 stars blog tour Booksparks humor Kamy Wicoff review She Writes

Book Blitz: A Hate Like This by Melaine Summers & Whitney Dineen

A Hate Like This by Melanie Summers & Whitney Dineen (A Gamble on Love Mom-Com, #2) Publication date: September 8, 2022 Genres: Adult, Comedy, Contemporary, Romance Single mother Moira Bishop hates when her family interferes in her love life. If life as a young widow isn’t hard enough, just add three boys, a slew of unruly pets, and ownership of Gamble Alaska’s only diner. The last thing she needs is a man to look after too. Entertainment lawyer to the stars Ethan Caplan hates his clients. There’s only so much coddling and placating a man can do in a lifetime. He’s finally decided he’s had enough, so he escapes to the tiny no-horse town of Gamble to work on the novel he’s always wanted to write. Positive that Alaska will be distraction-free, Ethan’s sure he can pen a bestselling legal novel. That is until he lays his eyes on Moira Bishop. Suddenly he finds himself having five meals a day at the diner, just so he can talk to her for a few minutes. When Moira’s son wins ti
Read more